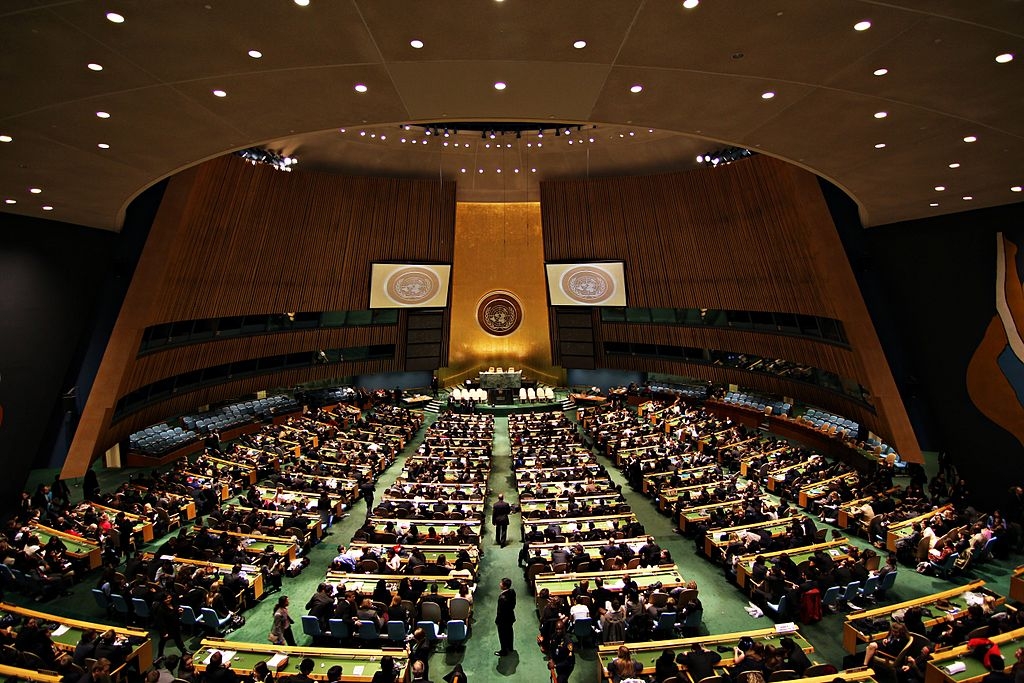 It also plays a significant role in the process of standard-setting and the codification of international law. The Assembly meets in regular session intensively from September to December each year, and thereafter as required.

Functions and powers of the General Assembly

According to the Charter of the United Nations, the General Assembly may:

- Consider and approve the United Nations budget and establish the financial assessments of Member States;

- Consider and make recommendations on the general principles of cooperation for maintaining international peace and security, including disarmament;

- Discuss any question relating to international peace and security and, except where a dispute or situation is currently being discussed by the Security Council, make recommendations on it;

- Discuss, with the same exception, and make recommendations on any questions within the scope of the Charter or affecting the powers and functions of any organ of the United Nations;

- Initiate studies and make recommendations to promote international political cooperation, the development and codification of international law, the realization of human rights and fundamental freedoms, and international collaboration in the economic, social, humanitarian, cultural, educational and health fields;

- Make recommendations for the peaceful settlement of any situation that might impair friendly relations among nations;

- Consider reports from the Security Council and other United Nations organs.

The Assembly may also take action in cases of a threat to the peace, breach of peace or act of aggression, when the Security Council has failed to act owing to the negative vote of a permanent member. In such instances, according to its “Uniting for Peace” resolution of November 1950 (resolution 377 (V)), the Assembly may consider the matter immediately and recommend to its Members collective measures to maintain or restore international peace and security (See "Special sessions and emergency special sessions”).

The Assembly has initiated actions — political, economic, humanitarian, social and legal — which have affected the lives of millions of people throughout the world. The landmark Millennium Declaration, adopted in 2000, and the 2005 World Summit Outcome Document reflect the commitment of Member States to reach specific goals to attain peace, security and disarmament along with development and poverty eradication; safeguard human rights and promote the rule of law; protect our common environment; meet the special needs of Africa; and strengthen the United Nations.

The search for consensus

Each of the 193 Member States in the Assembly has one vote. Votes taken on designated important issues — such as recommendations on peace and security, the election of Security Council and Economic and Social Council members, and budgetary questions — require a two-thirds majority of Member States, but other questions are decided by simple majority.

In recent years, an effort has been made to achieve consensus on issues, rather than deciding by a formal vote, thus strengthening support for the Assembly’s decisions. The President, after having consulted and reached agreement with delegations, can propose that a resolution be adopted without a vote.

Because of the great number of questions it is called upon to consider, the Assembly allocates items relevant to its work among its six Main Committees, which discuss them, seeking where possible to harmonize the various approaches of States, and then present to a plenary meeting of the Assembly draft resolutions and decisions for consideration.

The General Assembly allocates to the Third Committee, agenda items relating to a range of social, humanitarian affairs and human rights issues that affect people all over the world.

As in previous sessions, an important part of the work of the Committee will focus on the examination of human rights questions, including reports of the special procedures of the Human Rights Council which was established in 2006. In October 2016, the Committee will hear and interact with special rapporteurs, independent experts, and chairs of working groups as mandated by the Human Rights Council.

The Committee also discusses questions relating to the advancement of women, the protection of children, indigenous issues, the treatment of refugees, the promotion of fundamental freedoms through the elimination of racism and racial discrimination, and the right to self- determination.  The Committee also addresses important social development questions such as issues related to youth, family, ageing, persons with disabilities, crime prevention, criminal justice, and international drug control.

At the seventy-first session of the General Assembly, the Third Committee considered over 60 draft resolutions, more than half of which were submitted under the human rights agenda item alone.  These included three so-called country-specific resolutions on human rights situations.